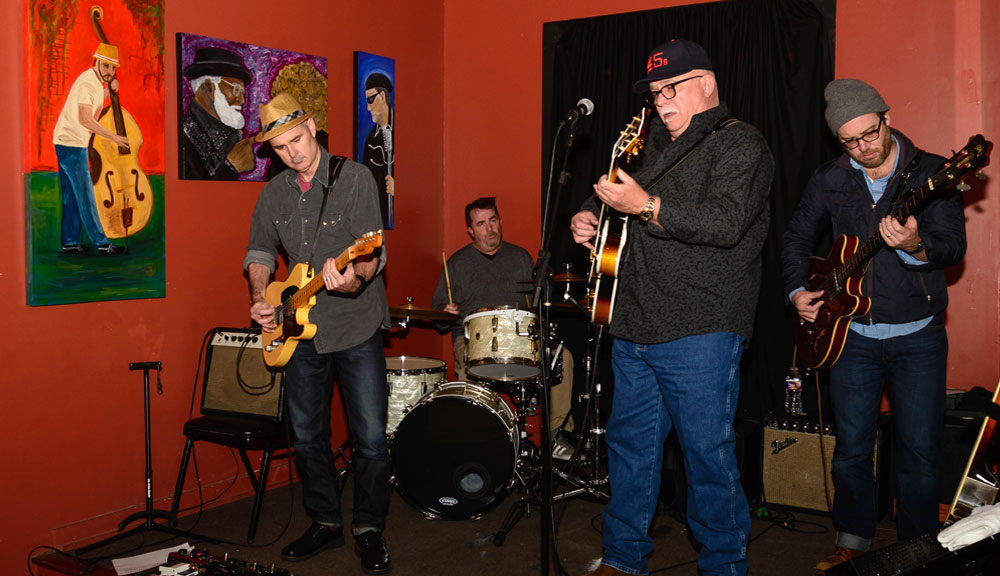 Steve Howell’s collaboration with The Mighty Men has spanned the better part of three decades. Their affinity for the music and each other shows in every album they create and show they perform.

Guitarist Chris Michaels cut his musical teeth in the late 80's and early 90's as a bass player in the Shreveport, Louisiana, area, including notable one-nighters with Cab Calloway, Martha and the Vandellas, and Augie Myers. Chris has also played innumerable gigs with local heroes such as The Deadbeats, Iraz Baz, The Cut, David Egan, and Buddy Flett.  Later exploits included extensive touring with Beanland, a notorious jam-band from Oxford, Mississippi.  The mid-90's were spent doing numerous recordings and live dates as a member of Boondogs in Little Rock, Arkansas.  Other notable gigs that followed included recording dates and live shows with artists such as the late Jim Dickinson, Greg Spradlin, Isaac Alexander, Mulehead, Ho-Hum, Kami Lyle, Kevin Gordon, The Yellow Hope Project, and Buddy Flett.  Although primarily focusing on electric bass, upright bass, and guitars, Chris released a solo record of Americana-inspired songs titled "Morning & Night" in 2009.  Throughout it all Chris has maintained a musical kinship and friendship with Steve Howell, both in the studio and on the stage.

Drummer Dave Hoffpauir started playing professionally in 1982.  He played around Shreveport for 10 years or so in bands such as the Psychobillies, the Native Sons, the Deadbeats (his first collaboration w/ Steve Howell), Dorothy Prime and the Housecats, Betty Lewis and the Executives, and in various house bands which backed artists like Jessie Thomas, Kenny Bill Stinson, and Buddy Flett.  In 1989, he formed the SugarKings (his first serious collaboration with Chris Michaels), and he also played in the Infidels in 1990 (his first serious collaboration with Jason Weinheimer.)
​
After moving to Little Rock, Arkansas, in 1992, he continued playing with the SugarKings but also began playing in several Arkansas bands, including Ebo and the Tomcats (which backed Billy Lee Riley and Dale Hawkins on several occasions), the Skeeterhawks, the Cockleburrs, and Mulehead.  He and Kevin Kerby briefly tabled Mulehead and joined Ho-Hum in 1993.  After recording several demos with various producers, including the legendary Jim Dickinson in 1994, they eventually signed a record deal with Universal Records in 1995.  They had one major label release, Local, which came out in 1996.  Hoffpauir joined the Boondogs in 1999 and again worked with Michaels, Weinheimer, and Dickinson as they completed a project that was never released on Garageband.com Records.

Bassist Jason Weinheimer owns and operates Fellowship Hall Sound in Little Rock. In addition to producing and engineering, he plays in the Boondogs, Love Ghost, The Libras, and with songwriter Isaac Alexander. He also played with the late great Jim Dickinson, who served as his studio mentor and musical guide for many years. Jason’s Fellowship Hall Sound studio in Little Rock has produced many significant recordings by artists including Steve Howell & The Mighty Men, Jim Mize,  Isaac Alexander, Boondogs, The Yellow Hope Project, Greg Spradlin & Band of Imperials, and Buddy Flett .

Katy Hobgood Ray is a singer-songwriter, children’s author, the host, director and producer of Confetti Park, a kid-friendly radio show and podcast featuring music and children’s stories from Louisiana. Born in Bogalusa, Louisiana, raised in Shreveport, she has lived in New Orleans for the past several years, and is now located in Memphis, Tennessee. Katy has been chronicling Louisiana arts and culture since 2000, when she launched an online North Louisiana music zine called NeonBridge (now in archive). As a writer, she’s contributed to SB Magazine, VisitSouth.com, New Wave, Tulane Magazine, Jazz Archivist, and more, and worked as a radio host and content producer for NPR’s Red River Radio. Her new CD release, Louisiana Oranges, is currently gaining widespread critical favor.

Michaels, Weinheimer, and Hoffpauir have continued to play with Steve Howell for 30 years while pursuing their other musical interests and have formed a very creative bond that has yielded some fine recordings.
Booking & Publicity
Betsie Brown
Blind Raccoon, LLC
betsie@blindraccoon.com
901.268.6065
© 2019-2020 Out of the Past Music, LLC - All Rights Reserved