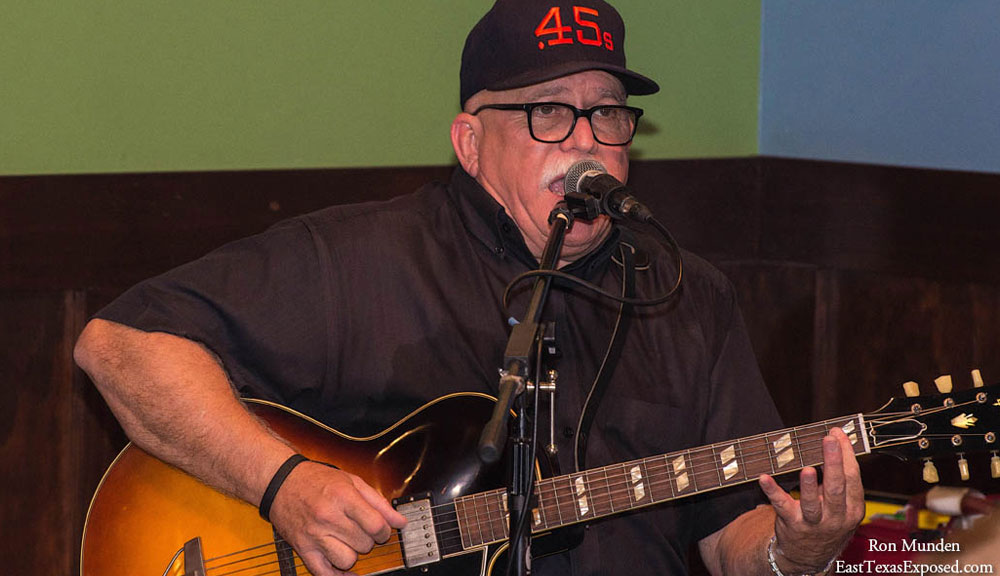 Steve Howell was thirteen when he first heard Mississippi John Hurt fingerpicking country blues. The year was 1965, and the experience became a revelation that opened the door to a new musical universe. Steve knew immediately that tame, folky strumming of the guitar was a thing of the past for him. As Steve’s journey progressed, Mississippi John Hurt begat Blind Willie McTell and Leadbelly. They in turn begat Robert Johnson, Son House, Rev. Gary Davis, Blind Willie Johnson, Blind Blake, and a host of other black acoustic guitar players and vocalists. His interest in rural, folk-blues styles and the history of the music led him to learn more about how this music came to town and melded with the horn-oriented bands prevalent in the cities, creating a strong affinity for him with traditional jazz and the music of New Orleans from the first half of the twentieth century. His musical Odyssey naturally included the pop, country, rock, and blues music of the last half of the century, but always in the background stood the music of Louis Armstrong, Miles Davis, Bill Evans, Lester Young, Jack Teagarden, Art Tatum, Count Basie, Duke Ellington, Chet Atkins, Johnny Smith, Wes Montgomery, Bucky Pizzarelli, Joe Pass, George Van Eps, Lenny Breau, and many other great jazz artists. Although very interested in many other music styles (bebop, rock 'n' roll, rhythm and blues, and others), the heart of Steve’s playing and singing is rooted in the rural acoustic blues and traditional jazz genres born in the American South.

Born in Marshall, Texas, Steve lived in Kilgore, Texas, until the age of seventeen, when his family moved to Shreveport, Louisiana. Upon Steve's graduation from Captain Shreve High School in Shreveport, he lived in Dallas, Arlington, Austin, and spent some time in Pennsylvania during 1972-1973. Late 1973 brought the beginning of a hitch in the U.S. Navy which took him to Key West, Florida, and then to Haverfordwest, South Wales, for 3 1/2 years. During this time, he soaked up the British acoustic scene, playing folk clubs in South Wales as well as in the South of England with his partner, fingerstyle and slide guitarist and mandolinist, Arnie Cottrell. They also played several folk music gatherings including the Pembroke Castle Folk Festival in the spring of 1976.

Upon his return to the United States and Shreveport in 1977, he attended Louisiana State University in Shreveport and graduated in 1980 with a degree in Communications. During this time he played on the Shreveport club scene through the late seventies and the eighties, with numerous gigs around East Texas, initially as a duo with guitarist David Dodson in 1977 and then with his partner, Shreveport restaurateur Jim Caskey, beginning in 1978. Steve and Jim were regular performers at Shreveport's Red River Revel Arts Festival, having played the festival every year, except three, since its inception. Their duo, Howell & Caskey, has opened for Country Joe and the Fish, Anson Funderburgh and the Rockets, Bugs Henderson, Ponty Bone and the Squeezetones, and shared the stage with blues legend Brownie McGee. They have also played together in rock 'n' roll and blues bands over the years, most notably The Deadbeats and The Movers, with musicians from Shreveport and the Ark-La-Tex area such as Dave Hoffpauir, Mark Roberts, Chris Michaels, Steve Ramey, and Randy Guynes. They also played traditional jazz and blues as a trio with Kathryn Hobgood lending her vocals for about two years. Steve has taken the music to many locations across the United States, including the annual Waterfront Blues Festival in Portland, Oregon, where Steve taught a master’s class in acoustic fingerstyle guitar in addition to performing on the main stage.

Steve currently lives in Marshall, Texas, with Leigh, his wife of 45 years They have two sons , Sam and Ben.
Booking & Publicity
Betsie Brown
Blind Raccoon, LLC
betsie@blindraccoon.com
901.268.6065
© 2019-2020 Out of the Past Music, LLC - All Rights Reserved